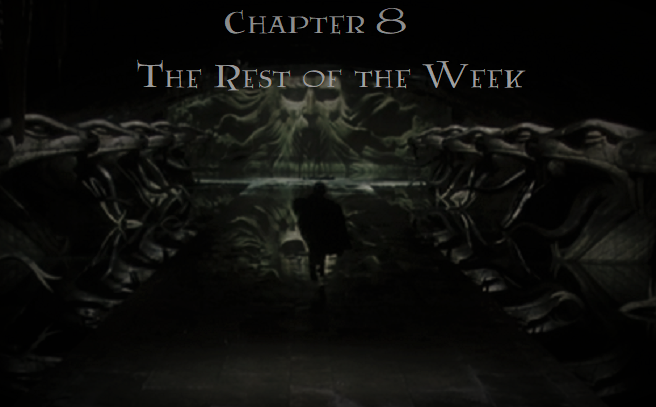 While the rest of the day went by fast and free, Ron got to see Harry once again after the evening holiday had passed. The funeral and feast were held in a private chapel, and after a few hours of silence with no one else around, it was time for Ron to say goodbye to his friends.

“Hey guys, I’m so sorry, I know I’m a bit of a brat but I just… I just wanted to make clear that I think you should stay here for now,” he said as he walked over to Hermione, “and I will continue to visit your place until the end of this month. Thanks for being the best summer Harry, and thank you for listening to me. Bye, guys.”

It took only moments for Ron to exit the chapel and walk back to his room, a tear in the corner of his eye as he thought about everything that had happened. Harry was gone, so what? He always believed that things weren’t going to turn out to the way he wanted anyway, but he still felt guilty and had to get help to fix his problems. This time his problems weren’t caused by him, but were caused by the way Harry and Hermione had treated themselves. For Ron, that was too much. He just really didn’t like the killing curse anymore.

On the way to the dorms, he was interrupted when he stopped after some fruit cake. While enjoying the cake that he had, he noticed a young boy looking down his side, laughing. It was the little prince, Ron noticed, that had gone nuts when he heard about Hermione’s death.

“She knew I should be the one to start killing again, but she never told me,” he said as he pulled out a large pair of dark-haired scissors. “That was the least she could have done, she knows how much I hate being left hanging up over the summer.” He started slashing, trying to take care of the pain but not finding his cutters at all effective. “I told Harry, you can’t stop me any more,” he added, pulling himself off the chopping board, smiling to himself while he walked away.

“Poor guy didn’t have a great life when he was growing up either,” Ron said, not quite pleased to see the little kid who had gone mad. He smiled to himself while eating some fruit cake, walking towards Gryffindor tower. Ron was still very happy, despite being very disappointed with this year. He remembered when Cedric died, but didn’t want to remember it. He wasn’t good at crying, or at taking care of himself. So he would probably try not to think of it, anyway.

Just before he reached the Tower for his very first time, Ron found himself in the hall of the Chamber of Secrets as Harry’s funeral procession passed. He tried to ignore it as fast as possible, looking around the grounds.

And then a hand touched him, and he froze. It touched him on the forehead, but nothing really happened.

“Weasley, don’t be afraid, just relax,” a voice told him soothingly. Ron recognized it immediately, as if it had been in his thoughts during his childhood. It was Draco Malfoy, and he was the one who had touched him.

Ron was silent for a moment, wondering what had become of his mind now, but then he heard the voice again.

“Come with me, Weasley, this is Malfoy’s time to shine,” it said.

Ron shook his head, and he walked forward. Draco Malfoy smiled slightly as he led him through the hall of the Chamber of Secrets.

“Weasley,” he said. “You have made a very important choice in this life. It is time to do something you could never have dreamed of having done, for it is not possible to imagine the end to this journey.”

Ron nodded, and he was in the exact same position that he had been in the past. He had felt as if the world was slipping through him, only it was just not there.

“Not safe,” Malfoy said, and he leaned forwards to sit next to him, watching him with some amusement. “There is no safe place to be now. It has become impossible for you and I to survive. I have only one chance, and you are the only one I can rely on. The only one.”

Ron nodded to him as he looked at him, “You have no friends?” he asked with a nod.

Malfoy turned to look at him, and it looked like that was when everything went grey. It felt like death to him. “There are no friends,” he muttered. “None at all, Weasley. It’s as simple as that. The little prince who never knew any better has gone mad. He betrayed me, and now he wants me gone.”

Ron was silent for a moment. “What?” Ron asked, confused.

Draco looked at him, looking straight at him and not letting his eyes move, “Weasley, you said you weren’t stupid, didn’t you?”

“I’m not stupid,” Ron said, shaking his head. He knew, somehow, the man was trying to say that he was stupid. But he could never really figure out, “What do you want from me?”

Draco snorted again, but only for once, and he said, “Do you not want me to save him?”

“Yes,” Ron said, “but if you want me to go rescue him, you will need to tell me who to go after.”

Malfoy blinked, “Just tell me what Potter told you, about his plan. What did he ask you, anyway? I gave him my favorite book, so I know he wasn’t stupid.” Malfoy looked around, then pulled out his copy of ‘The Diabolical Plan’, a slim and darkly-written text with a lot of symbols all over.

Ron shrugged. “Nothing,” Ron said, “Harry’s been acting weird ever since I saw him after he saw you. He said that if there is any way to keep you safe you better get off my back first.” Ron stood up from his chair, looking towards Malfoy who had gotten down next to it, “And he gave me this potion I think?”

Draco’s eye twitched. “So even Harry Potter doesn’t think you’re doing any good for him right now, huh? What potion?” he asked, grabbing Ron by the arm, “I think it’s got something to do with me.”

“Nah. I think, instead, you and I,” Ron said, not moving from his position beside the table, “are to do something important today, and that is to get Harry out of danger. Of being dead now.”

Draco groaned, “Fine, get yourself a knife and some kitchen implements.” Draco stood up from his chair, setting Ron on the floor and setting down his knife in front of him, “Let’s do this, Weasley,” Draco said and Ron, still standing up, did the same, taking out a large pot with a small wooden lid and a knife from the kitchen drawer.

It was going to be another long evening of fighting and shouting for Ron, so he gave him a small nod and a thumbs up.

Draco and Ron took a moment to wonder what was the point of this whole experiment. If they could make a very important difference in this world, there were no other options. They needed to find a way to change the world that worked.

Ron was a little concerned about what that meant for their future, “Hey Draco, I’m not sure I like you. You’re just really cold and boring. You have such a weird face. Maybe I can help you?”

It didn’t take Draco long to realize what he had said, “What are you talking about, this isn’t what you are. You are a useless little rat, I hate you.” Draco quickly shook his head, and asked, “Do you have your wand, or is that for sale at the thrift store?”

They were approaching the end of the hallway, where Harry and Ron had gone on about who was the stupidest, funniest, and most evil of their three best friends. Draco looked in the direction they had been, “Okay, I need you to focus for one moment on you and Potter.” Draco handed him the special stew they’d made. It was a very good mix, like lemon and sugar. It was everything that Harry and Ron would have wanted at Hogwarts.

Ron was still confused, he wasn’t sure if he was supposed to be watching him or not but he wasn’t paying any attention now. Ron closed his eyes, remembering the conversation he had had with Harry. The way Harry had tried to explain that he was the smartest person on Earth, but Ron had said that Hermione had to be smarter than him. Ron could remember the sound of Harry’s words. Ron smiled. They all knew who the evil one was.

Draco let out a small gasp as he felt the chill of the night air on the back of his neck and then felt like he could cry, “It’s not working, you idiot.” Draco closed his eyes again and said, “Don’t cry Draco, let it happen.”

“I remember it all too well, I couldn’t have done anything else, but it does make me so sad. I’m just a sad kid and I think you are the worst.” Ron opened his eyes, letting the stew fall to his lap.

Draco felt the tears roll down his cheeks. He didn’t know why the last person he had expected would love him so much, and now it felt like he was dying. He closed his eyes, feeling his fingers digging into the crook of his neck. He wasn’t afraid anymore, not anymore.

A quiet voice broke the silence, but the cold was still coming down the stairs, just for him. “Well well, you don’t like it when you cry.”

The boys turned to find the little prince looking up at them, a huge grin on his face, “Oh Draco, getting Ron to do something for you makes me happy! What a waste of a day!”

Draco’s eyes filled with tears again but he just shook his head, “It’s all right, I can handle it. And I can handle you. You’re the only one left that I hate. I’m not going to let you hurt anyone.”

Ron was shocked at the sentiment. It came across as so sincere, but Draco didn’t care anymore.

Draco stared at the boy, “I have never been happy before!” He whipped out his wand and he did what Draco’s father had done so many times; he killed. He uttered the ultimate death curse, “Doom!”

The young prince died in an almost gruesome manner. And when the flames burned his corpse away, he laid still, staring at a wall, dead and un-awake.

Ron stared in awe, looking through the flames that covered the young boy’s corpse, and saw a smile spread across Draco’s face. “Oh, God,” he whispered. “That was just so perfect.”