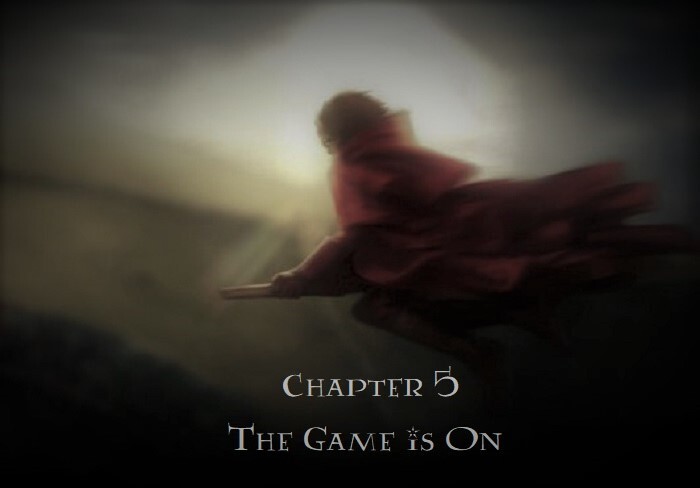 The next day was the big Quidditch match, and Harry was at a loss for words to explain why it was called Quidditch. He tried to figure it out himself, and eventually the match started. There were no words, just the sound of the boys singing and the excitement. It made him feel like he was in a magic school.

“Yeah, I’m in Quidditch,” Harry said. “I’m pretty sure I’m going to try and beat Quidditch in the first round.”

As he and the team got ready, the Weasley twins arrived with a group of Aurors, who all had their masks on. One of them had a broom stick sticking out of his hand and said, “You know, I’ve never seen anyone get a broom stick out of a broom before.”

The Aurors looked at each other in surprise, and one by one they turned to face Harry. “You’re right,” one of the Aurors said.

“So,” Harry said, looking out the window to make sure they were in the right place, “Why are you here?”

“Also,” added Fred, “Because we’re investigating a crime you did not commit.”

George’s eyebrows furrowed. “I’m not sure who was behind this crime, but if you’d been able to identify them before I was here, you’d probably be able to stop me from doing it now.”

“Well, I’m in Quidditch,” Harry said. “Not a Quidditch coach, just a broomstick. A broomstick that is about to be broken or destroyed.”

The Aurors were shocked at the statement.

“Well then, Harry, I think I can tell you who it is,” George said. “The person who committed the unforgivable act of being a prat.”

“A prat?” asked Harry, shocked. “Are you saying someone’s a prat? Like a person who eats the flesh, uses poisons, steals from the dead?”

“Of course, but not just anyone who steals, kills, or causes harm to people. This person did it to the Ministry itself,” George said, taking another deep breath. “Which makes it treasonous, and therefore, an act of war. So if you could catch this person before you die, I would appreciate it. Do you understand?”

“Of course,” Harry answered, “But who is this person?”

Fred elaborated, “But we have evidence pointing to one person. A name you already know, Draco Malfoy.”

Harry’s head hurt again. He was very familiar with the Malfoy name. He knew Draco’s name in his dreams, and in other ways as well. “Are you certain it’s Draco Malfoy? The one in the robes?”

“That is right,” George said. “He is an employee of Lord Voldemort. He is part of the Dark Lord’s plans, the mastermind behind many of the worst actions of the Dark Lord, and he is a very dangerous prat. In a few days, we will arrest him for trial and possibly death. And the entire Ministry is going to fall upon him, no questions asked. The only thing they won’t do is let him off scot-free.”

Harry was horrified. “Oh, my God,” he said in disbelief, “Are you fucking kidding me?”

Fred shook his head as well.

Before Harry could respond, Professor McGonagall stepped out of the shadows. Harry had forgotten about her, but it made him wonder what she would say.

“Good news, boy!” She exclaimed. “Quidditch isn’t a very fun game, but it’s all that we play, right? So we need you to stand up there and play it, and the Ministry can’t stop you!”

Harry felt guilty, as if that was a clear threat. This was going to be embarrassing to the other players. This was probably going to be a whole lot of fun.

“Well, there you are,” George said. “You should go to Quidditch, or something, and show the Ministry what real courage is all about. They should see you as one of the team.”

Harry shrugged, though it had to be one of the biggest shrugs he’d ever given. It didn’t really matter, it was Quidditch and Harry was already one of the team. They couldn’t stop him. Harry took his broomstick and flew away with Professor McGonagall.

This was the big Quidditch match, the big one everyone was looking forward to, but not quite knowing what to expect. It had to be one of those ones where the referee is going to give a hand call, and a certain player is going to get lucky and win, which was the sort of thing a team would just accept and forget about. And Harry wasn’t just going to lose against some guy on a broomstick, he had a team.

Harry knew how to handle this, and he knew how to win this. He was going to beat his opponents, win the Quidditch match, and make them miss Christmas, too.

The moment the Golden Snitch was released, he took off into the sky in style, a gliding parabola in the wind. “I’ve never flown a broom this fast,” Harry said when he realized his broom was gone, but he knew, somehow, that he still had it. Harry felt like a prodigy flying his broom up there in the air at an almost superhuman rate, but when he stopped and thought about it, it had never been that amazing.

A Bludger flew out of the ground just to his right and landed right in front of him, and then Harry looked around. He spotted a few Aurors, some Death Eaters, and a bunch of Ministry personnel, and he knew that at that very moment it was going to be a very tense moment for them all. Harry didn’t want it to turn into a fight, though, because at that point, he was already getting the hang of the sport. He turned his attention back to the Snitch, and took another swig of his drink.

The Golden Snitch flew through the air, a ball of flame bouncing off the top of the Hogwarts Express as it flew. Harry spotted the other team’s Seeker, Draco Malfoy, looking at him with wide eyes.

“Malfoy,” Harry said, “There is the Quidditch match. You are going to score a touchdown if you hit the golden snitch, and you will go home with a large bag of candy.”

Draco Malfoy stared at the golden snitch for a moment, then nodded. “I’ll try,” he said, “But you know what I need from you?”

Draco Malfoy smiled, and started laughing loudly, “I scored the most points for Gryffindor!”

Harry was feeling pretty good about himself after the match, which was good news, since the day before he had lost. On the plus side, his team had won, and he had won something even greater: Draco Malfoy was going to be his best friend ever. His parents had done their best to raise Harry to be a good person, but their own lives had not given the two of them enough opportunities to see where that led him. As it turned out, he didn’t really need to think about it very much. After all, the first step was always to have a good time.

As Harry watched the crowd, he noticed a small boy walk past him. It was the little prince, and he looked like the prince of dragons, or even just a pretty baby boy. He seemed very happy, and he just kept laughing, which was kind of strange. Then Hermione came into view and said “Harry!”

“Hello Hermione,” Harry replied. “Why do you call me by my nickname?” he asked.

“Why, to tell you the truth, you do know me already, don’t you, Harry?” Hermione laughed and pulled his arm toward her and smiled. She pressed her lips to his ear, whispering, “I need to talk to you about some important things, Harry.”

Harry was surprised, as she kept calling him Harry, and he wondered what was up with her calling him that. She hadn’t been calling him by any of his normal names, like ‘Lord Potter’ or ‘Master of Death’ or the ‘Grim Reaper’, but he guessed that she had just been curious as to who he was. “I’m glad to hear it, Hermione,” he replied.

She looked around at the crowd and the little guy, who seemed very happy and excited. “Good, we’ll talk tomorrow, when you’re not in the house,” Hermione told him.

Harry looked to her and saw that her eyes were dark and full of sadness, she looked so sad and disappointed. She turned her attention to the boy who was laughing hysterically, it looked like he wanted to scream, but his voice sounded normal, like he was having a really good day.

“I should go see what’s wrong,” Hermione mumbled, her eyes staring at the little guy and her voice was full of regret and confusion. As she walked over to her boyfriend, Harry was struck by a thought. ‘That boy might be a bit odd,’ he thought as he walked away from them. He would worry about all that weird stuff with Hermione, but he didn’t really have to worry about it at this moment.