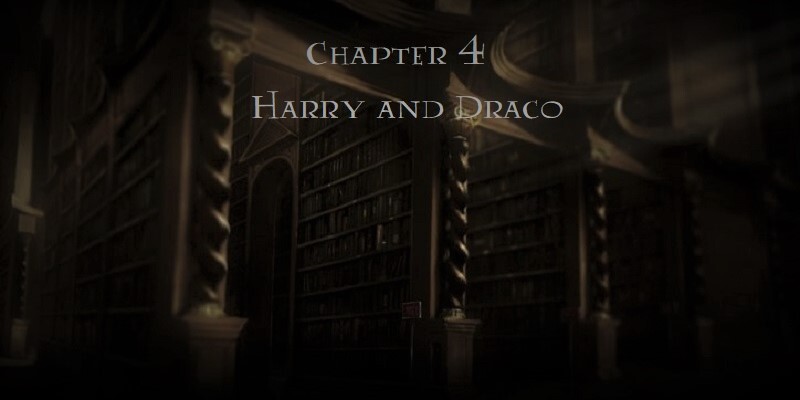 The next day, Harry was in the library, studying the first textbook he had bought. He wasn’t really sure what it was about, but he was hoping to learn something he would never understand, and maybe help Draco find the secrets of his life.

Harry knew he couldn’t avoid Draco’s presence for very long. Harry didn’t remember how many times Draco had tried to kill him, but Harry felt like he had heard it a hundred times, every time, that time.

In his mind’s eye, Harry watched the blonde’s face contort as he held onto the knife that had pierced his leg. His chest heaved. Harry knew it was painful, that it could hurt, but he wanted to keep his promise. Harry kept looking down at the knife, and the blood was soaking Draco Malfoy’s shirt.

Draco Malfoy’s skin was like silk, Harry thought, and he wasn’t wearing it. He didn’t care; that wasn’t what mattered. He needed to be able to feel his blood again. He needed to feel Draco Malfoy, because he couldn’t bear to look at anything else.

“Potter, what are you doing?” Draco demanded.

Harry was startled from his reverie. His mouth dropped open, and he realized that Draco had been watching him. He tried to look away, but he couldn’t. Harry knew that this was wrong.

Draco Malfoy took a step forward and glared at Harry again. “Why are you here, Potter? I told you to leave me alone. I told you to go back to my place and sleep, and all you did was scream and bite your lip, but I am not going to leave you alone here.” Draco’s anger was burning.

“You don’t have a right to be angry with me,” Harry said. “You are a wizard, not a dog.” Draco’s mouth dropped open. “I am not going to hurt you. You are my friend.”

Draco Malfoy stared at him, eyes wide. Then he reached up, pulled at Harry’s shirt, and tore it off. He stood up, glared at Harry again, and then pulled Harry’s jeans off. “Are you going to give up on me or what?”

Harry looked up at Draco, who took Harry’s hand. “I’m not going to give up,” Harry said. “I am going to make you my friend again.”

Draco laughed. “Good. Then just come with me and we’ll find a house, and you can watch me as you used to. And after you watch me you can come and talk to me, and I will teach you everything I know, and I will let you use your wand in all my classes, and you can do things you’ve always wanted to. You will not die in my house, because no one will ever love you the way I have, not even your brother.” He held out his other hand. “You will not be alone.”

Harry’s eyes widened, and then he smiled.

“What is that?” Draco asked, surprised.

“It’s my charm.” Harry smiled, and Draco felt the weight of it lift. “It’s all that matters now, right?”

Draco grinned back. “I hope so,” he said.

Just then, Hermione’s small boyfriend stepped out of the shadows, with a big smile on his face. “Hey Harry, you know I need help with some homework,” he said, waving his hand.

Harry’s eyes shot open. “Uh… what homework?” he asked, surprised, and Draco looked quite embarrassed for him.

“Potter, don’t you know the little prince? He’s the one who got into the war. He fought like an ace, and he never lost a battle, and I swear on the cross of my life that he’ll win the war, too. He’s been a real friend of mine.” Draco nodded.

“Oh,” Harry said, trying to remember what that meant. “I’ve heard about him. He’s… he’s great at Quidditch, and… er… ” Harry trailed off, as if he’d gone through a very painful memory.

The prince and Draco both looked at each other and looked at Harry, thinking about him in silence, and the prince was smiling. “Don’t worry Harry. You know your friends. They’re good people. That’s what makes the difference.”

Harry nodded. “I do,” he admitted, but didn’t want to answer anything.

“And now,” Draco said, looking at his wand in his hands, “for the important homework,” he pointed to a large book. “This is the one on the History of Magic, and here is a note that you were supposed to write on the same page… ” Draco started writing on the page and paused, before adding a few final words. “And this will be the last letter you will write, and your last piece of advice to you.” Draco paused again, his voice still somewhat hushed and serious. “And if you die, please don’t forget these.”

Harry looked around the table, and saw that the rest of the people around them were watching the prince in silence. All eyes were focused on Harry, as he finished the first part of his homework, and then looked back to Draco, who was watching him with a confused expression.

“Thank you Draco,” Harry said slowly, “I’m sure you didn’t expect to be doing this. I’m afraid I’m doing it all wrong… “

Draco shrugged. “Just get used to it,” he smiled, and Harry nodded. Draco reached into his pocket and pulled out a book called ‘The Diabolical Plan’. “It’s quite a comprehensive book,” he smiled at Harry and handed it to him. Draco turned and looked over at the group of students. “These guys will do anything for you, Potter,” Draco said softly. “They will even sacrifice themselves for you, because they know that if they fail, that’s all the world will know about you. You can choose to stay here and be the centre of attention, or just let them all die so that you will live forever. It all depends on you.”

Harry’s heart dropped. He was in an unusual situation.

“I’m sorry Harry Potter,” Draco said softly, and turned his attention back to the books.

The little prince took a deep breath, then he slowly opened his book, taking note of the contents. “You see,” he began slowly. “The reason why I’m so happy to see you is because I am going to use your power to destroy your world. The only problem is that I’m going to get away with it, because Harry Potter is too young for such a power. And I haven’t even told you what that power is yet, so you’ll just have to see for yourself.”

Harry smiled. “I’ll see what I can do about that,” he said quickly, hoping that this might be enough to quell the anger and confusion coming up in his heart. “I need to go now. Thank you Draco, it’s good to see you again,” Harry said as he left.

The others watched him go, with some annoyance, as they knew that he would probably return, so they just tried to ignore the fact that Harry was being so weird.