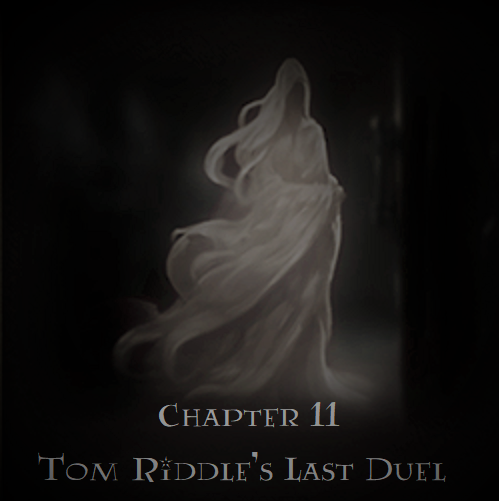 Draco smirked, he had known of this particular scenario a million times. This was his time. It was going to happen. He wasn’t afraid of death, but he was afraid that it would all end, that he would be left on the sidelines watching while his friends died or got turned into a living snake. Draco knew this would be bad. There would never be a peaceful ending. He held his wand close to his chest, trying to calm the storm inside him.

The specter of the little prince spoke to Draco again, “I want you to learn that in order to accomplish everything you want, you will have to die in a way that will not leave you alive to learn the secrets of life. Your soul will be cast away from you, like all that has been consumed by the power of the Dark.”

Draco chuckled. He was not a man to lose to a small boy, “You know, if you were not in a certain way evil, there wouldn’t be anyone who wanted to do you harm. Maybe they just did not like you, maybe they hated you, maybe they had no idea what you could accomplish if you are given the proper amount of time to learn magic.” Draco’s voice was very gentle. “If all you wanted was to have the freedom and the opportunity to become the person that you were always meant to be and to live your dreams, you would be much happier without the death of those around you. But I guess you’re a sad, lonely guy, aren’t you?” Draco laughed and shook his head. His wand was glowing with a faint blue glow. It was a familiar shade of violet.

Tom grinned in satisfaction at Draco’s comment, “Well I do think he is an amusing and quite humorous fellow!” Tom’s smile had grown wider. He raised his arms, and magical spells began to form around him. He made a few gestures with his fingers and formed a ring of magic around him, as his arms started to glow bright red. He looked up to see Draco with an open mouth, and was surprised to see that Draco had begun to laugh in his face. Tom then realized he was actually holding Draco’s wand, and felt a slight thrill in his chest, “Oh look, I have your wand now.” Tom looked down at Draco and let out a satisfied sigh.

Draco’s eyes began to shine with light and his face grew more radiant, “Who says I need a wand?” Draco replied, his smile turning slightly wicked. “I have the power!”

Neither wizard wondered where Ron and Fred were right then. They couldn’t hear them or see them at all.

The Weasley brothers were sitting on the living room couch, drinking red cups of tea. Ron eyed his brother with a sad look, “Mom’s always saying that she had a bad case of twins. I just didn’t think you were the cause. I mean, how are you going to make her laugh if you’re a Death Eater?” Ron frowned.

Fred’s eyes were narrowed as he looked up to his brother, “I can see your point.” Fred laughed. “But then again, there was the time she got us all stuck under a lake for seven years, with all the magic in our house, while she tried to sneak in the potions that she wanted. I wonder how much she was able to use. And there was the time I caught her and Lucius in an attack that killed four people and took over a million lives.”

Ron looked over at Fred, “There were worse things she could have done that I’ve known of.”

Fred took a drink and shrugged, “It was in the war though, so she had all sorts of bad memories of it. We never really got a proper war story. I think my grandfather went into the war as a fighter pilot and won. So I’m just used to stuff like that.”

Ron didn’t say anything and leaned back on the couch. As he did so, Fred got up and came down from his chair, “It’s just… I’ve never even been inside any of the dungeons.”

“The dungeons?” Ron muttered under his breath as Fred began to get up and walk.

“Yeah. The dungeons that we never used to go into.” Fred sighed and picked up his glass, “I suppose I never quite got why that was.”

“I’ve been in there a lot, and it gets cold there sometimes. The dungeons are not nearly as good as they used to be, so I haven’t been inside as often in a while.” Ron said with a sad smile, “So this whole Death Eater thing just comes across as such a big waste, really. Why can’t you just go back to being like all the other kids that are just like us?”

Fred snorted, “What, I’m not that big of a kid. I’m just kind of like a normal teenager. If I wasn’t a Death Eater, I don’t think I’d have ever done any crime. I know you want to do something about it, though.”

Out in the hall, they heard Harry’s voice shout in surprise. “What the hell is that?”

Ron’s eyes lit up, “The Boy-Who-Lived! Sorry Fred, I need to tell you to shut up now!” Before his brother could respond, Ron waved his wand again and the air went crazy. Fred was caught off guard, and the air erupted with magical power that made his body go stiff. He stood still for a long time as Ron ran to Harry.

The scene in the Chamber of Secrets was one Ron had never seen before, filled with an incredible amount of magic power and no one was safe. Prince Tom Riddle was standing behind the barrier that separated him from everything and Harry Potter, the boy who killed him, was standing next to Draco Malfoy in the midst of this new magic world. There was a very dark, silent, beautiful smile on Draco’s face as his wand flared with magic to kill a specter, an angelic creature that had always terrified Ron.

“A-Avengers!” Harry exclaimed as Harry fired a bolt of lightning at the dark creature that had soiled Draco’s mind. Harry was the starry light, and he was holding his own. It’s power was as unstoppable as if there were no god at all, but the prince just hovered there with that strange, evil smile on his face.

Across the room, Hermione Granger had just finished casting a patronus charm to summon her mother’s spirit in the form of a tiny, red, glowing woman. There was so much magical power and no one was safe. Hermione noticed Ron watching her from afar, and she smiled at him, “I didn’t expect this, I suppose you’ll have to forgive me,” and she cast a charm on her own hand, making it invisible, “We aren’t dead though, Ron.”

The evil specter was just laughing at all the children trying to kill him. They couldn’t hurt it, because it was a wizard, and all wizards have some sort of magic that can protect them from harm. It wasn’t a charm, but one of those spells you had seen on some movies.

“The Dark Wizard is back,” shouted the specter with his tongue out, “He’s here!” His laughter echoed in the school.

Ron had been listening, but had only been able to make sense of one thing. His friends and Malfoy couldn’t kill a spirit. Hermione had only thought that she could, because her parents were still alive, but that was another story. Harry and Draco had fought hard, and both were alive, but it seemed like there wasn’t much that they could do against the curse of the specter. It was up to Ron to save them.

Ron raised his wand, “Hey, guys!” he shouted at the four people he knew, “Get down on the ground if you need to, I’m going to finish this one myself!”

Malfoy looked at Ron in amazement, but then smiled with pride at his friend, and turned to face Harry, taking his hand and pulling him down, “Come on, Potter, it’s going to be fun.”

The little prince grinned at Ron with an air of confidence, “You think so? Well come on, it’s a school day after all, let’s get this over with quick!” With a slight swing of his wand, the specter lifted his body up to the ceiling of the Chamber and cast an instant wave of green light.

Ron took a deep breath and closed his eyes, “Yeah, okay.” And as he swung his wand around, he began to sing the chant that he had practiced since he was little:

The boy who lives,

The sun that sets,

And the moon never shines.

He takes the moon,

We will be one again!

His eyes were red and burning like they never left the fire!

His blood red hair shone like it burned up all the darkest night,

And his voice was filled with rage and fear!

But it wasn’t just his voice was fierce,

It was the whole of his soul!

His hands were filled with fire!

I’m not the boy who lives,

I’m the one who was born.

I’m the man that never leaves,

I’m the man that never knows.

My fire burns so fiercely,

This is the Ron that I love!

The blue and green of the sky began to fade, and everything around them was transformed. The entire Chamber of Secrets was covered in a dark, swirling mass of darkness that was much more intense than Ron’s usual magic. When he finished his song, the whole chamber was completely silent.

All around him was a sea of dark purple flames that seemed to come from nowhere, but slowly gathered and coalesced into an enormous pillar of black smoke that rose up into the sky above them. Then everything went dark.